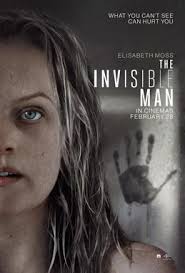 Sophie’s Choice 1982- Never saw it and let’s be honest, why rush to see this? Meryl Streep is easily the GOAT actress of my lifetime and she kills it in this role. But this draaaaaaaaged. The first half was virtually unnecessary; we’d rather hear her story at the camp than her relationship with Kevin Kline’s shitty character and the boring writer from the south. Although the end where she makes her choice of which kid to keep…that one stings for a few minutes. But the title of the film is called, Sophie’s Choice. Maybe 2-4 more minutes of her actual decision is focused on. Don’t you think you’d want to hear more of the aftereffects of her decision? Thankfully, I have only one kid to keep so the decision is easy: Goodbye, wife! JK, smiley face emoji.

I’ll give this a 5 out of 10 but only because Streep is so goddamn good.

Invisible Man 2020- Elizabeth Moss… She’s a great actress but I’m having it hard to believe she was stalked. Not because she’s as plain looking as a bread sandwich but because her character was as flavorful as a bread sandwich. I really missed why a psycho decided to stalk her; doesn’t mean that there isn’t a reason that’s either logical or made known. And it was pretty predictable throughout the film although one of the coolest moments is when the invisible man grabbed the knife at the dinner with Moss and her sister, killed her, and got the knife in Moss’s hand so fast that everyone thought it was her. The ending scene where she kills him (oh please, like you were going to watch this and/or didn’t know she would exact her revenge) was pretty cool too. If you stumble across it, don’t hold your exceptions anywhere near “lofty”, more like, “fuck it, nothing else is on.”

Manhattan Murder Mystery 1993-You either love Woody Allen or hate him. And I hate him. I hate his nebbishy demeanor as well as his quips (although smart, just not funny to me) and find it wildly inconceivable that the women characters in his films want to date/marry him. I’m not Jewish but my Jewish friends say they enjoy him because he reminds them of some of their relatives. I would get stomach ulcers if I had to spend family gatherings with him. He’s such an annoying fuck; always interrupting and talking over people. It’s like he styles every waking moment of the film with people at a dinner or house party; a cacophony of noise as you may have to strain to her one character’s lines. The films he’s not in but writes or directs are good. Hannah and her Sisters, Blue Jasmine, Match Point, Vicky Christina Barcelona, all solid watches. He’ll have a few lines you’ll smirk at but belly laughs are far out of the question.

Anyway, Diane Keaton plays Allen’s annoying neighbor who thinks their neighbor (Hesh from Sopranos) killed his wife. Alan Alda plays her conspiracy loving friend and he just as overbearing as she is. Woody of course, gets agitated from her playing Nancy Drew but realizes she’s onto something.

Look, it has a few moments but again, I can tolerate Woody Allan like ghost peppers in Indian food…in microdoses but eventually, I get diarrhea. The interesting moments and few jokes are far outweighed by Woody being Woody.

No Safe Spaces 2019- A documentary by Adam Carolla about how colleges are discouraging true free speech. If you listen to his podcast, you’ve heard 93% of all these stories before and may have battle fatigue from them. I was surprised to hear about the college professor in Washington state as well as the college student in Toronto who experienced such reactionary resistance to free speech and being censored. If you’re not familiar with his podcast, he does make some solid points with an unlikely partner in crime.