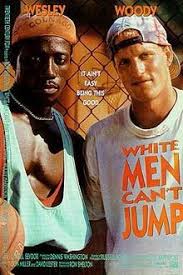 1951-The African Queen. Humphrey Bogart and Katherine Hepburn go down a river in Africa called, The African Queen. It’s your typical story: drunk sea captain (I know, I’m being redundant) escorts a prissy woman on his boat. This is apparently a classic but I sure as hell am not labeling it that. Some decent cinematography but it’s not enough for me

1992- White Men Can’t Jump. Man, I had no idea this film was so goddamn bad. The smack talk on the court was written by 12 year old white kids. The story starts out well and then completely fizzles out, complete with a terrible ending. Good news, you see Rosie Perez’s boobs a few times. Bad news, you hear Rosie Perez more than you see her boobs. 2.5/10

·         An ex-convict working undercover intentionally gets himself incarcerated again in order to infiltrate the mob at a maximum security prison.

·         I like Joel Kinnaman and want to see him in more movies that take advantage of his dark, violent presence. Unfortunately, this one didn’t do it. It tried to be a thriller, it tried to be a bit psychological, and it tried to be an action movie, but it did none of these very well. It plodded along, things happened, and then it ended. BTW – the ending felt like they were immediately setting up a sequel that I don’t really care about it. Look, you’ve probably run out of things to watch, so this isn’t the worst way to spend two hours, but its definitely not the best.