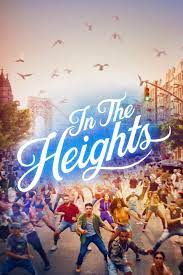 The film version of the Broadway musical in which Usnavi, a sympathetic New York bodega owner, saves every penny every day as he imagines and sings about a better life.

I’d never seen the musical on broadway, so this was my first exposure to the show that kicked off Lin-Manuel Miranda’s career. I’m sure this was fantastic on stage, but as a movie, it dragged a little. OK, maybe more than a little. The music was great and the numbers were all choreographed fantastically, but the plot itself plodded along until what was finally a telegraphed “surprise” ending.

Richard Gere is a dirty cop being investigated Andy Garcia and Laurie Metcalf. It was a shoddy mix of late 80s cop cliches and unforgettable characters. This is a borefest and I really wasn’t focused as it played in the background while doing other tasks. I only put it on as I thought this was the film that inspired The Departed but A) it’s Chinese and B) it’s called InFERNAL affairs. Don’t bother with this even if you stumble upon it on cable.

2/10 but I probably should’ve turned this off.

SJWs are going to go batshit insane when they see Mickey Rooney portraying a Chinese neighbor which is odd as they are Asian actors (mainly background or have a line or 2) in this film. TBH, it is a bit cringey and goddamn, it’s lazy racist humor. You want a chuckle out of me, make it SMART racist humor. The Charlie Chan shit may have blown people away in the 60s but viciously unfunny in 2021. But Audrey Hepburn plays a gal who isn’t as she seems (was this one of the inspiration for tons of films of this ilk?) in a NYC apartment. The plot who so “who gives a shit” that I turned it off after 30ish minutes. Classic or not, I couldn’t care less about here whimsical attitude. And let’s talk about how she shimmies up the fire escape and into an UNLOCKED WINDOW IN MANHATTAN. Yeah, everyone locks their windows and doors up, especially at 4:30am. And gee golly, George Pepard wakes up to find her in his home without a much of a, “WHO THE FUCK ARE YOU”, followed by a near miss warning shot. Yuck, THAT DOESN’T HAPPEN.