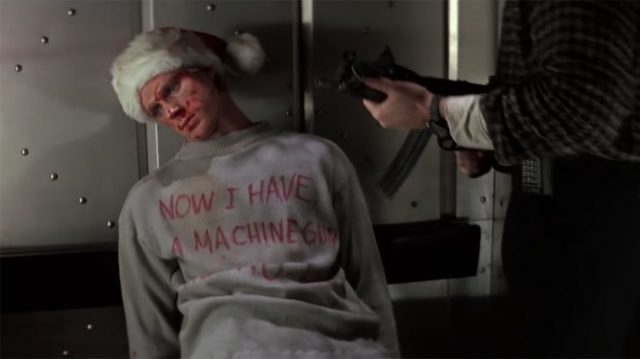 I gotta say, I really HATE when a hero or villain gives up his advantage. For example, in Die Hard. McClane has a gun to the head of the German terrorist. The terrorist that eventually wears the, “Now I have a machine gun, ho ho ho.” But McClane drops the gun and begins wrestling with him; eventually falling down a stairwell and breaks his neck. Cut the horseshit, no one would EVER give up position and their weapon; ESPECIALLY when the other guy who has been trying to kill you just got GOT.

Morning makeout sessions. I get it. Two attractive people, waking up next to each other after a night of passion – the natural thing is to kiss. Right? NO! WRONG! Look, I know what my breath smells like in the morning. It’s bad. Real bad. I wouldn’t even think to force my stank face hole on some unsuspecting victim. At least rinse your mouth out, you savage! So whenever I see two lovers on the screen awake and immediately lock lips, I scream, “THAT DOESN’T HAPPEN!”