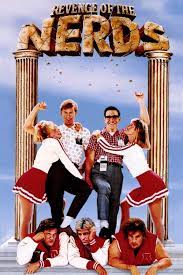 We just did Revenge of the Nerds on the podcast and wow, there a bunch of TDH but none as egregious to this old fraternity fella. So when the Alpha Beta’s house burned down, they sent the freshmen to live in the gym. But then the school allows freshmen to immediately join fraternities. In case you weren’t aware how joining a fraternity works, you have to rush (hang out with where you and they decide if you joining is a mutual wise decision) and THEN get a bid to pledge. Pledging is all the shit you see in the movies: hazing, scavenger hunts, getting the shit kicked out of you. So for all of the people who pledged 10.5 weeks like this author did, that’s a kick in the nuts where some kid gets in without going through all the horseshit? Yeah, no. THAT DOESN’T HAPPEN.

When I was in college I remember a number of times when the professor was in the middle of a lecture but some mysterious man appeared, whispered something in the prof’s ear and suddenly class was cancelled. Wait. I take that back. That never happened, but I have seen it in movies. A lot! Guess what? That doesn’t happen! I know I sure as hell wished it did, especially in law school, but sadly class was never cancelled due for mysterious reasons.