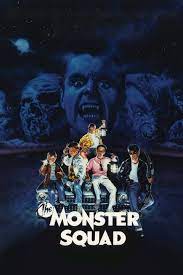 “That’s it buddy, you show that turd who’s boss!”

This film is like that groupie on the Poison farewell tour, all fucked out with no redeeming value. But is this a magical line to drop in several instances: walking into the bathroom and someone is loudly shitting or farting. Or was someone just farts in general. Either way, hilarious.

And for those of you who still defend Monster Squad, shame on you. That movie was ok as a kid and as an adult, it should be outlawed in the Geneva convention