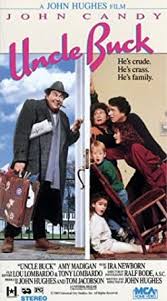 Jack Reacher – yes, I know they made a sequel…and it fell short of the first. But I think this franchise deserves more – and a star who actually looks like Reacher (In the books Reacher is described to be 6’5” and 240lbs….juuuuust a bit bigger than Tom Cruise). These books have so many great stand-alone stories that scream for the big screen. Reacher is a badass, fun character who really could build a successful franchise. Here’s the good news – Jack Reacher is getting his own Amazon TV show starring Alan Ritchson of ‘Titans’ fame. Not bad for us JR fans, but more movies would also be great. At least Ritchson is the right size!

I may be reaching but hear me out and I know it obviously can’t happen now but you know what could’ve been a plausible sequel? Uncle Buck 2. He marries his auto body repair girlfriend, has kids of his own, and hilarity ensues. Since Candy has been dead longer than the landline, obviously we wouldn’t want anyone to try and pick up the reins. But I think it could’ve been fun.