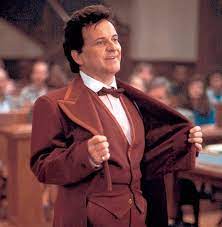 Here’s a glorified extra trying to put his own spin on a simple line and going WAY over the top. It sounds like he has a 64 IQ and is great when appearing to be perplexed in a group of your friends/colleagues/bail bondsman

“Take your time, pick the right words, get back to New York and give me a call.” – My Cousin Vinny