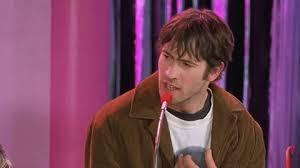 What am I basing this on? Quotability and no matter how many times I’ve seen it, I still laugh my ass off watching their scenes. Kevin Gootee’s picks in no order.

4.       Fletch (Fletch) – Don’t we all wish they we can do anything and STILL get the girl? Maybe I just adore Chevy Chase.

5.       Van Wilder (Van Wilder) – Ryan Reynolds at his best? Maybe. A glimpse into the Deadpool who would be? Probably. Hysterical? No doubt.

6.       Bluto (Animal House) – There were a lot of funny scenes in this classic, but Bluto was the one, always funny character. Who wouldn’t want to slam a bottle of Jack with this big man?

7.       Dr. Rumack (Airplane!) – This was one of the first comedies I remember seeing and for years I said, “We’re all counting on you.” Nielsen at his finest.

8.       Donkey (Shrek) – Eddie Murphy is hysterical, but as a Donkey…homerun. Let’s be honest, Donkey made these movies.

9.       Austin Powers (Austin Powers: The Spy Who Shagged me) – I often forget, but this bucktoothed Brit is hysterical. Yeah baby!

10.   Kirk Lazarus (Tropic Thunder) – This dude, dressed up as a dude, playing another dude is still hysterical. I doubt they’d be able to pull that character off today, but I’m glad they did while they could.