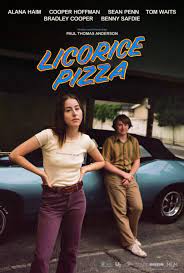 Our new segment where Kevin Gootee and Kevin Israel watch a preview of an upcoming film and give their uneducated opinions whether it will be good or not.

The trailer for Paul Thomas Anderson’s latest film, Licorice Pizza, dropped this week and I have to say, after two watchings and reading some synopses, I still have no idea what it’s about. Now, that’s not a bad thing. I tend to believe that modern trailers give away WAY too much of the movie because studios think audiences are stupid. Maybe they are. But Licorice Pizza’s trailer is a jumble of scenes that depicts some kind of high school romance gone wrong. If this wasn’t from Anderson, I’d probably skip it, but I loved Boogie Nights, so I have a feeling this one is going to be solid.

I think this looks awful and critics will be lining up to blow PTA because that’s exactly what they do. Yes, Boogie Nights is great and Magnolia is decent. But I liked this better when this was called Dazed and Confused. They’re trying to recapture that 70s nostalgia that DAC as well as Almost Famous had. But I’m not buying into this. I’m going to need a LOT of positive feedback for me to want to invest any time in this.