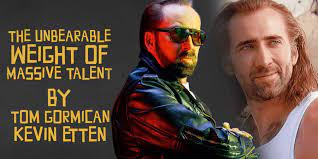 Trailer Talk this week has the Nicholas Cage version of JCVD, the Unbearable Weight of Massive Talent.

An obsessive fan forces actor Nicolas Cage to re-create his most famous characters and scenes during a birthday party.

·         I love it when actors become self-aware of their own ridiculous, and it seems that Cage is fully embracing this. This movie looks like a fun time with Cage playing himself in an over-the-top action romp. It’s hard to come down hard on a trailer when the movie it’s pushing is so damn up front. Good for Nic and here’s to hoping the movie is as good as the trailer looks.

This is the most meta thing Cage has done since Con Air. A self-effacing film that could fun but if you think I’m dropping $15 bucks on this, you’re insane. I’ll wait till Netflix