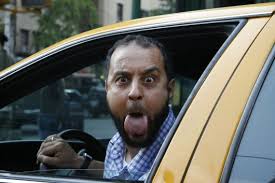 So you know when you’re on the phone and you have nothing more to say? What do you do? Just hang up, right? No! Of course you don’t! Why? Because you’re not some sociopath. Well, movies seem to tell us that we’re doing it all wrong. Have you ever noticed that when two characters are having a phone conversation, more often than not, when one is done speaking s/he just hangs up? No “good bye”, no “see ya”, not even a “hey, go F yourself!”. Nope they just hang up. Well, when that character hits the end button, I always yell, “THAT DOESN’T HAPPEN!”

New York cab drivers, no matter the race, are the most weirdly and viciously stereotyped characters in films. In Coming to America, Prince Akeem tells a cab to stop that’s picking him up at the airport. The cabbie slams on the brakes and tells him to go fuck himself…and then lets him in the cab?? You think someone who’s fresh off being told to go fuck himself is ready to forget that transgression and let him in the cab? Oh yeah, this happens in NYC where cabbies get stabbed for taking too long or smelling like shit. Yeah, THAT DOESN’T HAPPEN!