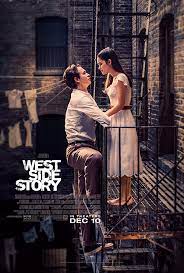 My wife loves musicals and Broadway shows so we saw this one on opening night. You know what? It was really good. I haven’t seen the original since I was in high school, so the story wasn’t too fresh…but who doesn’t remember Romeo and Juliet? Spielberg did a great job, it looked and felt like a movie and the musical numbers weren’t too intrusive. The cast was awesome and the whole thing flowed really well. My only complaint – it dragged a bit and some of the songs weighed it down a little. Overall though – solid! 6.5/10

Diane Lane is cheating on the gerbil hoarder, Richard Gere, with a younger dude. Things go awry (surprise) and bad things happen. It’s by no means a great film but it’s entertaining enough for a watch. Not exactly high frequency rewatch value for obvious reasons.

Quentin Tarantino’s first written film about an Elvis fan/comic book shop worker who marries a hooker and heads west to sell a suitcase full of cocaine. QT didn’t direct this and I think Tony Scott, who did, cut back on the character relationships and dialogue. No surprise that you see a lot of regular QT film regulars: SLJ, Chris Penn, Christopher Walken. It’s very good but not in my upper QT echelon.

I used to read damn near every Michael Crichton book there was and see damn near every film. Most of the film versions were shit: Sphere, The Lost World, and Jurassic Park was…fine. I really enjoyed the story of the LAPD cop assigned to solve a murder at a Japanese company’s party. What’s the twist? His partner is a Japanese culture adopted former cop aid the investigation. It does have that 90s clunkiness and strikes a few dead notes. All in all, not bad.